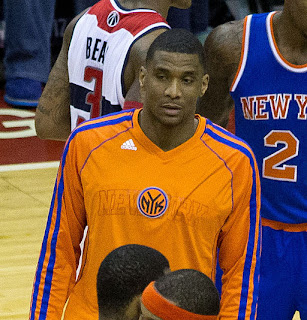 In an alternate universe,  James White won this year’s Dunk Contest.  In fact, in that world, he’d be champion three times over.

In this world, he is an NBA Champion. Not bad for someone who has played only 44 regular season games in 3 years spent with 3 NBA teams.  Sadly, however, for those who followed his exploits over the years, he is not a Slam Dunk Champion.

A review of his bio at NBA.com reveals that White is a former  McDonald’s All-American who never quite reached his potential in college. He was drafted with the 31st pick by the Portland Trailblazers in 2006 (or, to put it nicely, he was the 1st pick of the 2nd round of the draft).  But was immediately traded to the Indiana Pacers who proceeded to waive him even before the 2006 season started. He then got picked up by the San Antonio Spurs for the 2006-2007 season but played only 6 games with them. While he did not play a single game in the playoffs, he did get a ring, as the Spurs won the NBA championship for 2007.

White did not play in the NBA during the 2007-2008 season, but re-surfaced again in 2008-2009 with the Houston Rockets where he played a grand total of 4 games. After 3 years away from the Association, he won a spot with the New York Knicks this season, and he has now played 34 games. And this is how, nearly 7 years after he got drafted in the NBA, he was finally picked to be a participant in the dunk contest.

As numerous YouTube clips will show you, White isn’t called “Flight” for nothing.  His specialties: (a) running the length of the court, taking off from the free throw line, and dunking the ball with two hands; and (b) running the length of the court, and doing a between the legs dunk also from the free throw line.  So everyone, and their mother, picked him to win this year.

There were a few nagging doubts. Some said, what’s new? Jordan already dunked from the free throw line. And Dr. J before him. Heck, even Brent Barry did that in 1996.  More importantly, because he did not enjoy much success in his first stints in the NBA, White joined this year’s dunk contest at 30 years old, and yes, he was the oldest participant ever.

But you see, there is an itty-bitty difference between the dunks made famous by MJ and Dr. J, and the one Mr. White did as his first dunk. Dr. J dunked from the free throw line with one hand. MJ took off from the free throw line but did a double clutch before dunking with one hand.  James White showed up with 10 stewardesses, took off from the free throw line and dunked with both hands. Perhaps because he missed the first time, the achievement was lost on the judges and White only got a score of 45. It doesn’t take a genius to figure out that dunking with two hands per se requires a higher vertical leap and a higher degree of difficulty.  Doing that while taking off from at (or close to) the free throw line is worth at least  50 points in my book, more so if you consider that a contestant gets 30 points for missing every attempt. In an interview after the event, he admitted that he had the between the legs dunk ready if he made it to the finals, and that for his other dunk, he planned to take off “from the top of the key”.  But he didn’t get the chance.

And so, down the drain it went, Mr. White’s dream of winning the dunk contest. And with it, perhaps his one chance to truly make it in the NBA and get that nice contract, like that other former Slam Dunk champion Gerald Green, who recently parlayed his success as the NBA Slam Dunk Champion into a 3-year US$10 Million contract. White had, to paraphrase Whitney, his  one moment in time, and the ball (and all opportunities) just kept slipping from his hands.

The reality is for every Gerald Green, there are countless James Whites.  The NBA has 30 teams, which can keep a maximum of 15 players on their roster. That’s 450 players total, and every year 60 more players get drafted and even more try out for these 450 roster spots.  White, at 30, is a journeyman,  one of those players on the fringes of a team’s roster, the first to be let go when new blood comes in. He is under contract only for this season, and he has played less than 7 minutes per game on the average.  Worse, his performance at the dunk contest has been called a flop.

But take comfort, for as someone on Twitter said “[o]nly getting to watch James White in a dunk contest at 30 is akin to only getting to see Sabonis finally at 31 in the NBA.” So, whatever happens,  Flight, we’ll always have YouTube.