Could the Lakers trade Kobe? 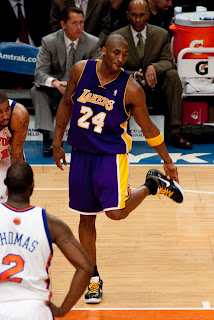 Imagine if you are Mitch Kupchak, the General Manager of the Lakers.

On one hand, you have Kobe Bryant, 34 years old and making US$27 Million a year. After this season, he is under contract for 2013-2014, when he is projected to  make roughly US$30 Million a year.  He will also turn 35 years old before that season starts.

In a perfect world, the honourable thing to do is to let Kobe play out his contract and offer him a 1-year deal for 2014-2015 for anywhere between US$20-30 Million with the understanding that that deal would be renewed as long Kobe wants to play. This, after all, is the player who gave you 5 championships and who, at 34 years old and on his 17th season, is still an MVP candidate and one of the most popular players in the NBA. On top of the 5 rings, his resume is impeccable: more than 30,000 points, 2008 MVP, 2 Finals MVP, 10  All NBA First team selection,  9 All Defensive Team selection, 15 All Star appearances and that great 81-point game.

On the other hand,  you have Dwight Howard, 28 years old, with an expiring contract. You need him to sign a long-term deal to be the face of the Lakers post-Kobe. Hollywood needs stars, and Howard is one even if his play has been less than stellar this season due to the season-ending back surgery he had to undergo last year. However, despite the fact that he is playing with 4 All Stars and future Hall of Famers, this season has been nothing short of disastrous. He obviously doesn’t like Mike D’Antoni’s system, and inexplicably refuses to play pick and roll with Steve Nash, the greatest pick and roll point guard the league has seen in years. Instead, Dwight wants to be in the post where, incidentally, Kobe is most effective.  He also wants the touches that Kobe gets, which demands have reduced Kobe to a facilitator-type of player. The Lakers, cognizant of the need to make Dwight happy, have turned Steve Nash into a spot-up shooter and Kobe into a point guard.

But could the Lakers go further and trade Kobe to appease Dwight and let him know that he is now the man for Los Angeles? Or should the Lakers just cross their fingers and have Dwight and Kobe play out their uneasy truce for the 2013-2014 season and then opt to not re-sign Kobe instead?

Flashback to 2004 – the Lakers had just lost to the Detroit Pistons in the NBA Finals. Shaquille O’Neal was 32 years old, had a year left on his contract and wanted a contract extension which would pay him US$30 Million a year. Kobe was 26 years old, and had just exercised an opt-out clause in his contract allowing him to sign with any team.

Faced with the choice between an aging superstar whose salary demands would negatively affect the team’s chances to lure good players and a player at his prime, almost, if not more popular, with a lower salary, the Lakers choose Door B: Kobe. And it was the right choice at the time.

Now, nearly 9 years later, the Lakers are faced with the same choice. There are, however, some obvious differences.

First, Kobe has a no-trade clause which Shaq did not have then. This means the only way Kobe can be traded is if he agrees to the trade. As a long time Kobe fan, I am almost sure that the only places he would agree to be traded to would be New York or Chicago. Or he could stay in LA and go to the other team. The Knicks aren’t feasible (I think) because they have Carmelo, but they have boatloads of money so who’s to say. I’m not sure if Derrick Rose and Kobe would work, and Chicago has, historically, refused to pay luxury tax, so that may not work either. The Clippers need a decent shooting guard, but Donald Sterling is a cheapskate and he will need a lot of money over the summer to pay CP3, so that’s not happening either. So it’s gotta be Brooklyn or bust.

Second, Dwight isn’t in the same league as Kobe popularity-wise. In fact, nowadays, he is one of the  least-liked players in the league. Winning, however, will cure all of that as Kobe and LeBron can attest. So if the Lakers start winning sans Kobe, all will be well in Lakerland.

Third, Dwight is at best, 70% of what he used to be, athletically. He does not have the same hops and explosiveness. Worse, his excellent play has always depended on his athletic ability. Can the Lakers be sufficiently assured that Dwight will regain this by next season? And even then, is he really an all-time great that you can build on, or merely a great complementary player?

Good luck weighing all of this, Mitch Kupchak. You’re going to need it this offseason.