Ricky Rubio and the Art of Passing 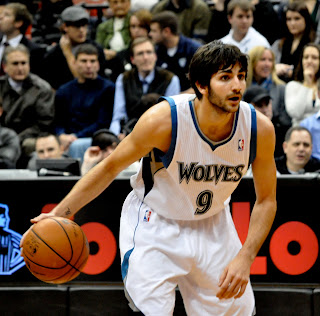 I like the other kind, the point guard whose main goal in life is setting up his teammates, making the right pass. More particularly, I like those who treat passing as an art.

To illustrate – there’s John Stockton, who holds the NBA record for the most assists. He is one of the greatest players ever but he was a fundamentally sound basketball  player who passed the way he played. Thus, for the most part, he dished out the basic chest pass, or bounce pass. Nothing fancy, but it worked.
On the other side of the spectrum is Magic Johnson. Equally effective, but the pass itself made you gasp out loud and clap – no-look passes, one-hand-length-of- the- court-off-the-dribble-passes, alley oops. In other words, Magic made passing cool.

Ricky Rubio is from the Magic Johnson school of point guards.  Sadly, he plays for the Minnesota Timberwolves which means you won’t see much of him on Philippine TV. Worse, he got injured midway through his rookie year last year. But, in the 41 games he played, he averaged 8.2 assists per game. To put that in perspective, that ranked him 6th  in the league last year, behind only Rondo, Nash, CP3, Calderon and D-Will.

This season, he only started playing  last December 15 but is slowly but surely rounding into form.  In the 13 games the Wolves played last February, he logged 10 or more assists in 8 games. In those 13 games, he averaged 12.7 points and 9.4 assists. And he is why the Wolves are must-see-TV on NBA League Pass.

You see, Ricky Rubio doesn’t just pass the ball to his teammates. He dribbles between his legs and makes a behind the back pass.  He gives no look passes in transition. He passes the ball through  the legs of opposing players right into the hands of teammates who don’t even realize, until that precise moment when the ball reaches their hands, that they are wide open.

The Wolves have been ravaged by injury this season. Instead of Kevin Love and Andre Kirilenko, Rubio has been forced to play with Michael Gelabale, Chris Johnson and Greg Stiemsma. (Yes, feel free to join me in saying “Who?”)  Imagine if he actually had good teammates who won’t fumble the ball or get hit in the face by his passes due to sheer surprise.

One of these years, and for the sake of Wolves fans,  David Khan, the Wolves GM, may manage to surround him with great teammates. Or maybe not. Khan is not really renowned for his managerial acumen.  This is the same person who picked  Jonny Flynn instead of Steph Curry in the 2009 NBA draft, and Wesley Johnson instead of DeMarcus Cousins or Greg Monroe in 2010. He also inexplicably decided to offer a multi-year contract to Darko Milicic, now out of the league, and managed to offend Kevin Love by offering him only a 4-year contract (instead of the maximum 5-year deal allowed by the current CBA) with an opt out clause prior to the 2015-2016 season which he will surely exercise.

And so,  as an 80s kid and a lifelong Lakers fan,  I’ll root for Rubio to go to the Lakers  in 2015 and take his place as the point guard who, like Magic Johnson before him, will bring Showtime back. Consider this – Rubio’s contract with the Wolves will expire after the 2014-2015 season. Coincidentally, that is also the season when Steve Nash’s contract will expire. And right now, the Lakers have no one under contract for that season. (To be accurate, the Lakers could have Dwight Howard under contract by then - god forbid. But that is another story waiting to be told).

And Rubio should be a Laker. He can’t be anything else. Else, like the Spurs’ Tony Parker, he will end up a great player on a not-so-popular team who does not get the accolades he deserves. And frankly, that would be a disservice to the art of passing,  in this age of players who think that only scoring and dunking will get you on Sportscenter.